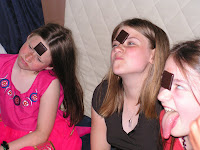 This is Ruth, me and my friend Harriet playing the aftereight game -> 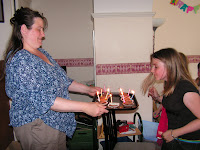 Above; me very unsuccessfully blowing out my candles 🙂

Went to a Changing Tunes concert last night. Wow, was it good, and boy, did it reiterate what a mess our prison system is (though I have to say no-one from the organisation was critical of the system per se, it was just apparent in my thoughts afterwards, based on some of the things said and unsaid).

Changing Tunes is a charity that uses music to aid the rehabilitation of prisoners and ex-offenders. That’s how their website puts it. What we saw was a group of fantastic people really touching peoples lives, through sharing their love of music with a group of people many in society want to simply ignore. The staff team of CT played together, along with a few people who have benefited from their work. The standard of music from both staff and ex-offenders was amazing, as are the statistics on re-offending (see the CT website for more on that).

I mentioned “unsaid” things earlier, and here is one of them. This is a charity, run on a tight budget. It reduces re-offending rates significantly. There are similar success stories elsewhere. Yet our prison service still centres around locking people away for years in poor conditions, then disgorging them onto a by-now alien society, and acting surprised when they turn up again fairly soon thereafter having offended again. Isn’t it time we started seriously investing in programmes like Changing Tunes, investing in education in prisons, investing in schemes that help prisoners upon release. Why don’t programmes that show consistently reduced re-offending rates get shouted about from the rooftops and funded to the hilt by the government?

Maybe CT don’t want government funding, requiring that degree of independence (I could well understand that position). Regardless, it just highlights the sorry state of affairs we are in. Prison population is incredibly high, yet we refuse to acknowledge that the system needs radical change if this is ever to change. 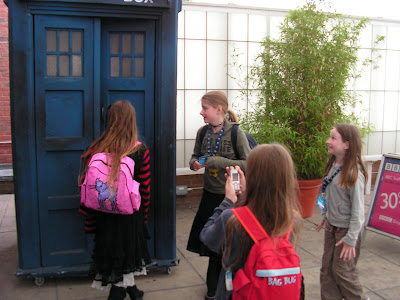 The higlight of our recent CBBC tour was probably before it even started properly. A real former TARDIS parked outside Television Centre! Actually the whole of our worthy “Let’s go to London to help the kids out with their Tudor’s project” trip seemed to turn into a Doctor Who tour. Canary Wharf (Torchwood), the Globe theatre, and the TARDIS to finally top it off. Just look at the expression on Ruth’s face….

Well we are well and truly back from our holidays now. I was so sad to leave the Netherlands and all the wonderful cycling (not to mention pancakes) that I actually cried!

We had a good time in London with friends afterwards. The highlight was going to the CBBC tour at Television Centre. Ruth was literally jumping up and down (and flapping her arms like wings) with excitement when they saw a real Tardis (not the one they are currently using but a previous one.

We did heaps of other stuff too, Hampton Cout, The globe, the Aquarium and Princess Diana Memorial gdns (lovely play park).

Jonathan meanwhile, stayed with my mum and sister and went to legoland, swimming and played with remote controlled boats, he had a great time too.

Now we are back and we have all the normal stuff to do, home ed committee meetings, dentist appointments, letters to write, companies overcharging us to harrass, playgroup trips, shopping, unpacking blah blah blah. So we definitely feel back again

The Dutch let us down today. Junction with signs to Breda in three directions for cyclists – not too helpful… Oh well, that’s not bad, that’s the first gripe to date. We followed a 25km ish route today joined by Aunty Jane on a hired (child’s) bike. They have a system of numbered junctions marked on a map, with traffic free and low traffic routes in between. You pick your next destination junction, and follow signs to that, then look for the next numbered junction and so on. Generally works quite well. I’m still admiring the fantastic infrastructure for cyclists. If we had something more like this at home I’m convinced we could increase cycle trips and decrease car use. 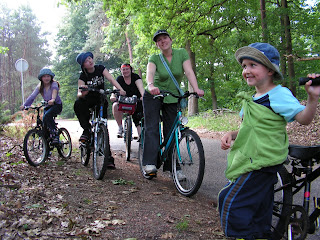 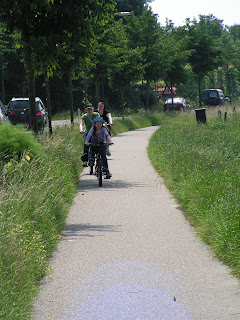